A Night of Navigator Nadeshiko and Hot Spring Steam
なでしこナビと湯けむリの夜

"A Night of Navigator Nadeshiko and Hot Spring Steam" is the ninth episode of season one of Yuru CampΔ. It premiered on March 1st, 2018.

Rin and Nadeshiko agree to go camping in Nanbu, but Nadeshiko comes down with a cold and has to cancel. Rin changes plans, and decides to go to the city of Ina, which is across the Southern Alps from Minami where she lives. Google Maps shows her that the shortest route is a mountain path with the trailhead at Yashajin Pass. She rides there on her scooter, but isn't allowed to take it onto the trail. She rides north and crosses the mountains at Tsuetsuki Pass, stopping at a cafe there.

Nadeshiko looks up tourist information for Rin. Chiaki drops by to see Nadeshiko, and cooks houtou for the entire family.

Arriving at Ina, Rin visits Kōzen-ji Temple, which she thinks of as the doggy temple, and buys a charm in the form of a cute dog. Next she goes to the hot springs where she falls asleep after having dinner, waking up after dark. 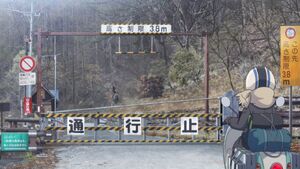 Yashajin Pass is closed to vehicles 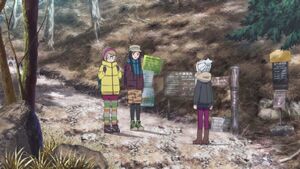 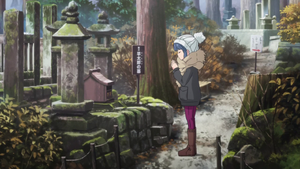 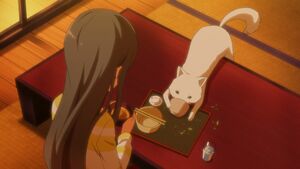 Rin dreams of Hayatarō, the dog spirit
Add a photo to this gallery

Retrieved from "https://yuru-camp.fandom.com/wiki/A_Night_of_Navigator_Nadeshiko_and_Hot_Spring_Steam?oldid=2793"
Community content is available under CC-BY-SA unless otherwise noted.