"Mount Fuji and Curry Noodles" is the 1st episode of the Yuru CampΔ anime series and the first episode of season one.

Rin goes camping at Lake Motosu. That evening she is startled by a stranger, Nadeshiko, near the washroom. Nadeshiko biked here to see Mount Fuji, then had a nap for the rest of the afternoon. With it getting dark she is afraid to bike home, and has no food either.

Rin offers curry noodles which they both eat at the campfire. They enjoy the view of Mount Fuji after the clouds clear up, before Sakura, Nadeshiko's older sister, comes and picks her up. Nadeshiko gives Rin her number so they can stay in touch.

The episode ends with a scene in school, which both Nadeshiko and Rin attend, although neither of them knows that the other is there.

Chiaki imagines a tent that would make winter camping more attractive. With a heater and a hard-shell roof, it resembles a kotatsu, which is a low table with a surrounding blanket and a heater underneath.

This gallery shows the estimate of traveling of the involved characters (and some real-life sense). 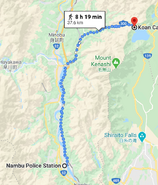 From Nadeshiko's home to Lake Motosu

Nadeshiko's house area with the bridge 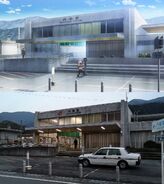 Utsubuna station
Add a photo to this gallery

Retrieved from "https://yuru-camp.fandom.com/wiki/Mount_Fuji_and_Curry_Noodles?oldid=3912"
Community content is available under CC-BY-SA unless otherwise noted.