New Year's Eve. Rin, who has arrived in Shizuoka, finishes the year at the campsite while enjoying the sea. On the other hand, Nadeshiko is busy working part-time on New Year's Day. Messages arrive from Rin and her friends where they are...[2]

Rin travels South to the coast to camp over the New Year's holiday. Stopping at a tea shop, the clerk recognizes her from when they met at the trail to Yashajin Pass. Rin goes to a Shinto shrine where she collects another doggy charm. Rin gets up before dawn to be at the beach for the first sunrise of the year. That morning, her mother calls to tell her that a heavy snowfall has blocked the roads, so she can’t return right away, and that they will pick her up in a couple days.

The Outdoor Activities Club travels with their faculty advisor to Mount Minobu and takes the gondola to the summit. They watch the first sunrise from there. Then they drive to the village of Takaori so they can watch the sunrise again over the peak of Mount Fuji, but arrive too late.

Ena and Chikuwa are late risers 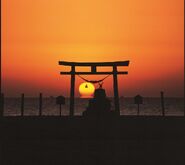 Edit to right of the section title.
Retrieved from "https://yuru-camp.fandom.com/wiki/New_Year%27s_Solo_Camper_Girl?oldid=3879"
Community content is available under CC-BY-SA unless otherwise noted.