Rin Shima (志摩 リン, Shima Rin) is a young girl in Yuru Camp△ who is a student at Motosu High School and enjoys camping, but she usually camps by herself until she meets Nadeshiko Kagamihara.

Rin is a pale-skinned girl with thigh-length dark-blue hair that is tied in a high bun with bangs hanging over her eyebrows, two hair strands framing her face on both sides, and purple eyes.

When camping, she wears brown boots and black leggings, a pinkish dress, and a green sweater underneath a plaid grey shawl. She usually keeps her hair in bun. Sometimes she also wears a white knit-cap and she has her hair loose. In one of the episodes, Ena Saitō tied her bun into a small teddy bear and a generic Japanese castle.

In school, she wears the typical female uniform (seifuku, 制服) and she has her hair loose.

Rin is depicted as having a quiet and reserved personality; preferring to camp alone. Despite that, she regularly converses and texts with Ena Saitō.

Throughout Season 1, Rin is seen slowly opening up to Nadeshiko Kagamihara and the rest of the Outdoors Activities Club members. This culminates in Rin agreeing to participate in the club's end of the year camping trip.

Rin began camping around the winter of her first year in middle school when her grandpa handed her down his camping equipment.

She's a solo camper in the first episode, but throughout the series, she seems to camp with Nadeshiko Kagamihara through the weekends whenever they invite each other out.

Rin encountered her near Lake Motosuko sleeping near the restroom. Later, after dark, Rin checked that area again and was startled by a crying Nadeshiko, leading to Rin running back to her camp and Nadeshiko following her. It turned out Nadeshiko overslept and found herself unable to return home and with no way to contact her family. Rin fed her some Curry Noodles after she heard her grumbling stomach.

Later Nadeshiko would cook a hot-pot as thanks. Rin felt bad afterward and apologized for declining an invitation to group camping with a disgusted face.

They've been texting to each other whenever Rin's on a trip or camping. Ena is the reason why Rin eventually agreed to go camping with others.

Ena usually does the hair bun for Rin in school.

Rin owes her for an incident that happened where the sign is closed, she told her just walked around it because it wasn't bothered to move it away on the road.

Chiaki invited Rin for a camping trip, but got rejected immediately. However, after some thought, Rin texted her that she'll think about it.

Rin met Aoi upfront in a food store and told her good luck on the job. In Episode 11, she bought the fire logs because she owes one for them making dinner.

The restaurant along National 300

In the anime, Rin's house is located here in place of this flood-control hut
Add a photo to this gallery

Rin in school uniform for Season 2!

Rin on scooter with hat poster

On scooter with no hat 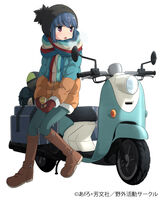 Rin leaning against her scooter

Rin with her hair down (Back View). This scene is in front of her house.

Add a photo to this gallery

Retrieved from "https://yuru-camp.fandom.com/wiki/Rin_Shima?oldid=4896"
Community content is available under CC-BY-SA unless otherwise noted.