"Welcome to the Outdoor Activities Club!" is the second episode of season one of the Yuru CampΔ anime series.

Nadeshiko plans on joining The Outdoor Activities Club. Initially planning on turning her away, Chiaki agrees to let her join at Aoi's suggestion that, if there are more members, they may get a larger club room.

Ena and Rin watch as the club tries to set up a tent outside. Ena goes out to help them when one of their poles snaps, and then points out Rin through the window. Nadeshiko quickly runs over, thanking her for helping her out in the past, and smacks into the window.

Rin goes camping by herself and thinks about how she acted when Nadeshiko was talking to her. Regretful, she hears Nadeshiko's voice repeatedly calling "Rin-chan," and assumes it's just her mind playing tricks on her to make her feel worse. Opening her eyes, she sees Nadeshiko standing in front of her. Rin hesitantly agrees to let her join her camping excursion and the two make a hot pot for dinner with the groceries that Nadeshiko brought.

To welcome Nadeshiko to the Outclub, Chiaki brings a dessert for the three of them to share. Nadeshiko impresses the others with how much she can eat. 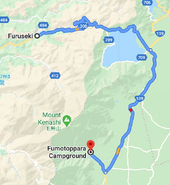 Rin's house location
Add a photo to this gallery

Retrieved from "https://yuru-camp.fandom.com/wiki/Welcome_to_the_Outdoor_Activities_Club!?oldid=3911"
Community content is available under CC-BY-SA unless otherwise noted.